Today was a trip to the v-e-t for yearly shots. $130 later and he's pronounced very healthy. A slight fogging of the eyes due to age, but no sign of cataracts. A few old dog fat lumps, but nothing bug, unsightly or nuisance making. But he does not like the v-e-t and was continually trying to leap off the exam table. 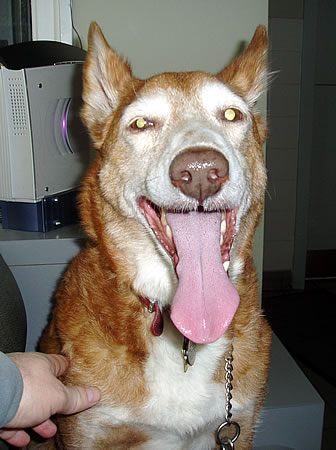 Parental 50th Anniversay status: ongoing. I think the B&B, with a dinner on anniversary night, and limos to and from both airports is probably a doable thing. Beyond that, they'd be on their own. Rough estimates peg that at around $3500 which I can probably split with my brother, so that's within the realm of possibility. Now on to planning... Things to figure out: how to pay for certain things from here. Possible solution. Paying for the B&B is easy, as is the limo, both of which can be done over the phone at reservation time, but the dinner and a few other things might be troublesome. A chauffered limo for dinner that night might be a nice idea as well.

You would not believe the ad I got in the mail yesterday. It came in a separate deliver since it wouldn't fit in my mailbox. It cost $1.65 in postage. It's a 9½ × 7 inch box from Mercedez Benz USA, LLC. Inside a grey overwrapping is a black velvet covered box with "A Great Leader Always Makes A Lastiung Impression." along with the MB logo written in silver on the top. Inside, on the top, is an 8&frac12 × 5½ inch onionskin paper with "Introducing The 9th Generation S-Class." printed in bold, black latters. Under than is four very heavy cardstock photos of, what I assume, is the 9th generation S-class Mercedes each with a different quote: "Imagination Rules The World -- Napoleon Bonapart", "Patience And Perseverance Have A Magical Effect -- John Quincy Adams", "Give Us The Luxuries Of Life And We'll Dispense With The Necessities. -- Oliver Wendell Holmes" and "What Is Genius - But The Power Of Expressing A New Individuality -- Elizabeth Barrett Browning". The back of each card has two more photos and a small description of a performance or luxury characteristic of the car. Under that is a small, grey invitation syaing "You're Invited" to experience the new 2007 S-Class, the foremost luxury sedan in the world.

A documentary of the rise and fall of the careers of Jim and Tammy Faye Bakker as told through the eyes of Tammy Faye. Tammy Faye comes across as a sympathetic character with truely boundless optimism and a relentless innocent drive. Whether that's true or not, who can really say, but it is true she's been through the wringer more than once. Building not one, but three sizeable television networks only to have them yanked away by, in order, firstly Pat Robertson, then Paul and Jan Crouch, and lastly Jerry Falwell. Falwell, especially, is portrayed as the snake we all know he is. His orchestrated takeover of PTL was stunning in its audacity.

RuPaul does a creditable job in narration, but the sock puppet introduction of the chapters doesn't work. Told through interviews (Robertson, Crouch refused to participate, a Falwell didn't even bother to respond), archival footage and fly-on-the-wall live footage, the viewer really has a lot of sympathy for Tammy Faye by the end of the film. She certainly doesn't live in the real world, claiming, as she does, that she's "lost everything" but lives in a gated community in Palm Springs and doesn't work for a living. Nevertheless, she never gives up and is always out trying to do something. Her pitch for a new tv show to Steven Chao, head of network programming for (was it NBC?) was squirm inducing. Chao was nearly in a fetal position by the end.

It's hard to know how much of this to believe, but I have no doubt that Tammy Faye believes this is the way things went. We see Jim Bakker's new wife, although she says nothing, we meet Roe Messner the builder of the theme park and Tammy Faye's new husband, and are party to Tammy Faye's meeting with the Charlotte paper's reporter who brought down the whole house of cards. He asks her for an autograph. She's a puzzlement.

; would not watch again