Get Your Biffs Running

Frank Hurley was the official photographer for Australia in World War I. He was also a bit of an innovator and was one of the few photographers to take colour photographs. This is one of them; 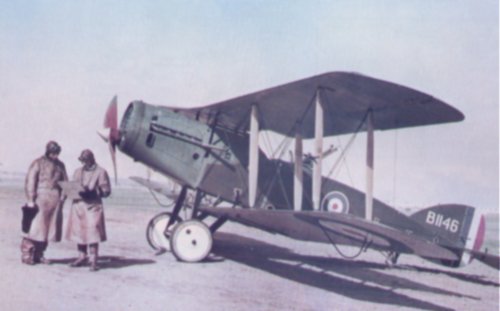 That is an Australian Flying Corps Bristol Fighter. One of the points of contention with WWI historians is what colour is PC10? This is the greeny-browny doping that the British used to camouflage their aircraft.

While this doesn't prove the colour exactly, it is better than an orthochromatic black and white picture which has a tendency to distort the warm (red/yellow) and cold (blue) colours.

In orthochromatic photographics the Belgian roundel (black, yellow and red) appears as one big black circle. The process distorts the warm colours to black and the cold colours to white.

The best bet for what colour PC10 really is can be found in WWII American paints. Olive Drab was developed from PC10. This became the standard camouflage of American aircraft in nearly all theatre in WWII.

Washed the Silver 'vette up good today then took it around town for a drive. Ate some subways, went to take photos of it at the local park but the batteries in the camera were dead. When I went looking around the house for AA batteries, the ones I found were all dead. I threw them in the bin.....

I was buying beer and fizzy (soda) at the local supermarket when a shiny black early C4 with custom wheels drive past the front of the supermarket. It was a convertible with a hardtop on. Schmick.

I was near my car of similar vintage and having a good gawk at this fellows car. He pulls up beside me and the window scrolls down. I say;

"That yours", he says pointing.