Gentlemen, we can rebuild her. We have the technology, we have the capability, we can create the 6000 Dollar Chopper. She will be better than she was, prettier, nimbler, faster.

This diary is the first installment of Project Chopper. If pictures and narrative of motorcyle (de)construction does not excite you, then mosey right on along.

Otherwise - walk this way for our first installment.


Background
The chopper in question is a completely original Kawasaki SR650. It used to belong to my old man, and before him there was one original owner. It's had a pretty easy life - mainly used for commuting and only has 65k on the clock. Despite the fact that the engine is as rattly as a bucket of bolts, and that the clutch grabs rather than slips, the bike is pretty reliable. On occaision it has been known to round up sport bike ponces in the twisties...

However, she has been getting long in the tooth, and I have decided to spend a bit of money, and make her stop, start and handle just a little bet better. Some mild engine work will be done so that it will be a bit of a street sleeper, but not too over the top. 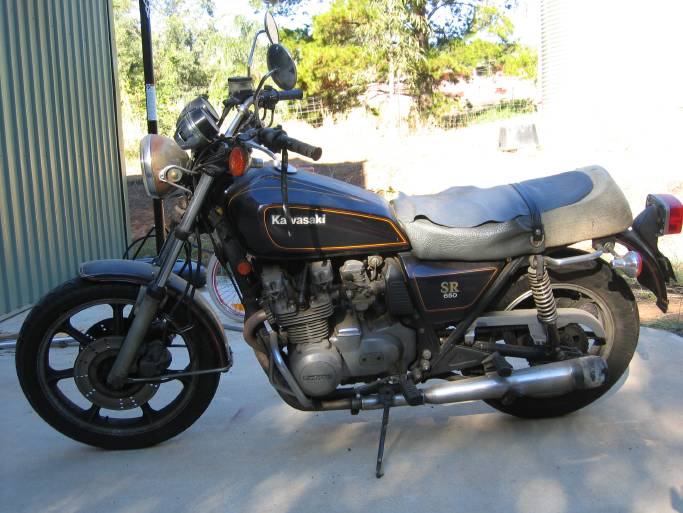 A side shot. Notice classy taped in jam tin over the exhaust muffler. Also the exquisite terry towelled seat with vinyl flap. I also told one porky, the headlight shell is not the original. The original only had a bulb, whereas this one is a halogen. 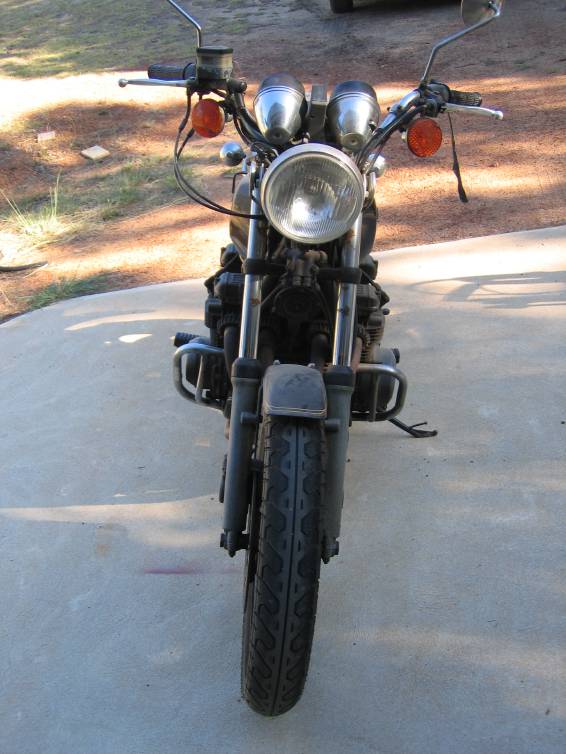 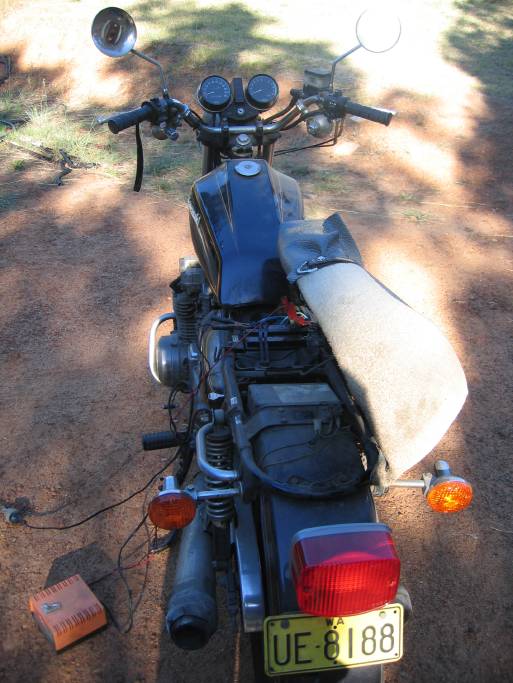 Rear view with battery charger attached. It has sat in the shed for 6 months without running. Five minutes on the charger, it started second kick. Yes, kick. Real men kick start their motorcycles, none of this nancy starter button crap. 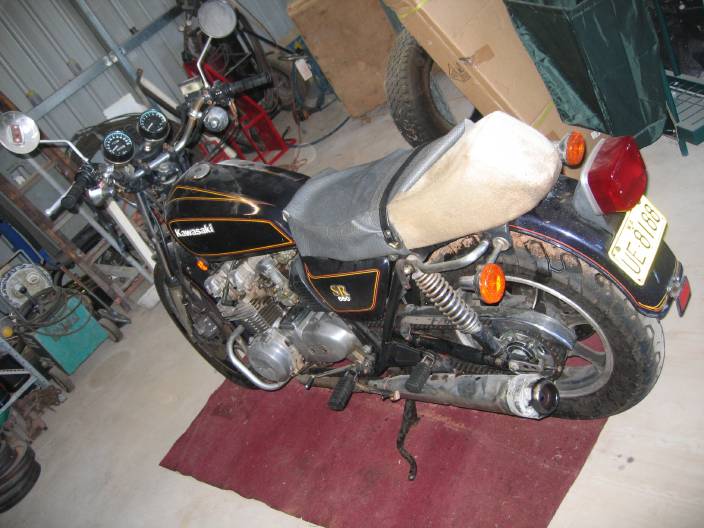 After a quick degrease and dump of oil - into the shed and onto the operating carpet. Now begins the deconstruction.... 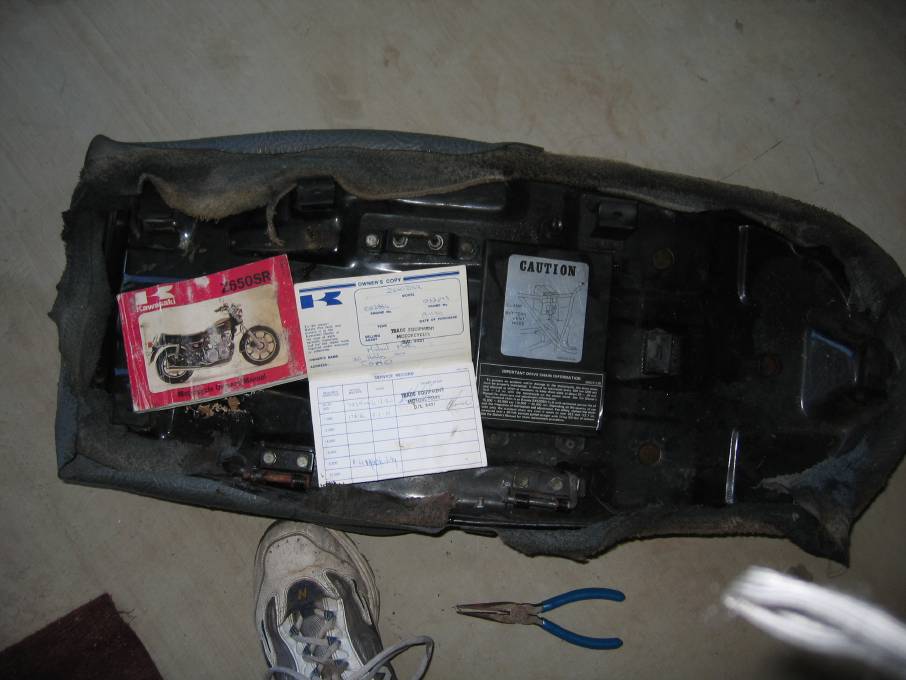 For old machinery buffs - notice the construction of the seat. All metal. The hinges are actually bolted on - with nuts. Everything is heavy duty. No wonder the thing weighs a ton. 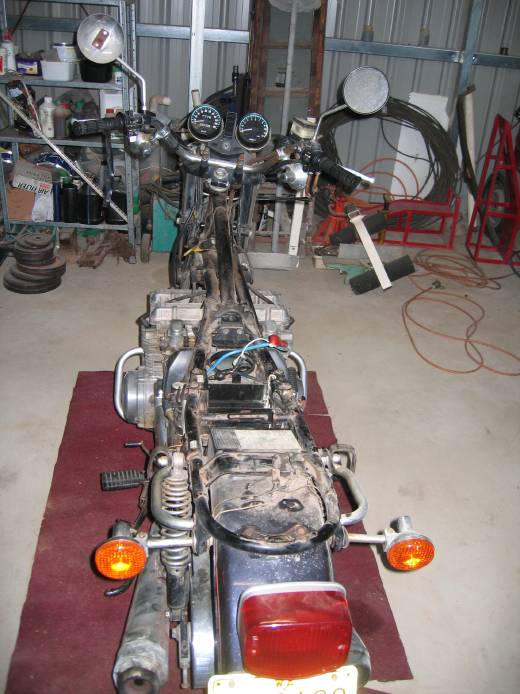 Rear view with the tank, side covers and seat off. Once again it's all metal. Everything is bolted, with real nuts and bolts. All the flange items are steel - even the top of the battery carrier is steel. The air filter was in remarkably good shape. 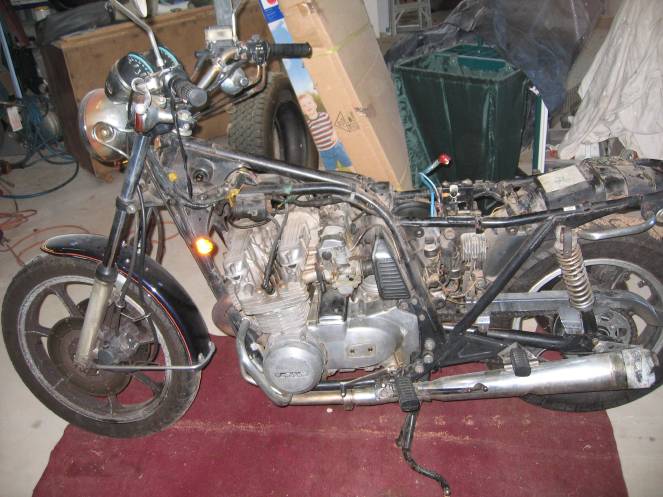 Side on shot. Everything is set up and ready for next week.

Next week is the serious stuff - all the paintwork stufff needs to come off to be carted off to the painters. The Chrome items are all going to the chrome guy to be rechromed. The engine is to be dropped out and sent off for examination.

Plans
Look - get rid of the baby poo brown. Use a black, but with flecks that show as faint silver. Silver trim where current lines are. Original badges restored and fixed to current locations.

replace all metal bolts with lightened polished/chromed (depending on location) fasteners.

Brakes - Possibly upgrade with modern 4 potters - jury is out on this at the moment.

Wheel - Would like to get wire spoked wheels, but if not, then either metal polish the currernt wheels, or maybe black powder coat hubs and polish rims.

Engine - depends on report. Possible big bore kit/different carbs/different cam. Will be getting new headers, and will get my mate to make a tasteful carbon fibre silencer.

budget
So far, no real costs expended. I have a new rear stand and a front stand coming, but as they are to be used for all bike projects, they are not considered budgetable to this project.

Time spent was about 1 hour to clean up the shed, prepare the bay and about 2 hours to degrease the bike, drain the oil, transport to the shed bay and strip off the tank/seat/side covers.

Cya next week for installment 2.