By dr k (Fri Mar 17, 2006 at 11:50:53 AM EST) Civilization IV, X-Men 3 ads, crossover slash fanfic, guitar strings (all tags)
One sure way to cure a gaming addiction is to play a game where an increase in difficulty correlates with an increase in the annoyance factor.

I have graduated to Noble — feel free to snicker — in Civilization IV. There are five more difficulty levels above this?

I must admit I have yet to play a game past Rifling. I once eliminated Salidin from the game, but didn't even get a special sound effect for defeating another player. So disappointing.

In my last Noble campaign, I was playing the Arabian empire (philosophical, spiritual) and was sharing a continent with Alexander. The Greeks are "aggressive", meaning their melee units get a free 1 star promotion. With barracks, Alexander likes to give his Axemen an additional 2 star promotion, which makes them annoying. What is super annoying is that Alexander declared war on me three times, the third time after I had already smashed his empire down to 2/3 size. Three thousand years of intra-continental conflict ensured that our civs were stunted by the time I could build a caravel, and no one wanted my new "Guilds" technology.

Speaking of Alexander, I have been watching Alexander Senki on DVD. (Why they changed the American title to Reign: The Conqueror and added a cheesy title plate to the opening credits I'll never know.) As a result, I have started working on a new Alexander/The Apprentice crossover slash fanfic novella, which I shall be posting shortly.

I don't know if they have them in your city, but Los Angeles has been plastered with billboards for the third X-Men movie. 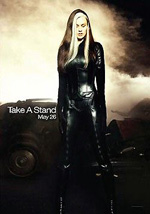 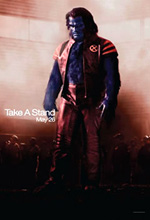 I declare this to be a poor design choice. The lone figures and desaturated colors make this look more like a Breast Cancer Awareness campaign.

(Apparently in France the movie will be called: X-Men: The Final Confrontation.)

Question for those who play guitar: I need new strings for my [wife's] acoustic guitar. There are about 600 flavors of strings to choose from. I just want new strings. What should I get? Please limit your answer to 50 words or less.