By dr k (Thu Feb 23, 2006 at 09:11:25 PM EST) Civilization IV, image tagging, PC hardware (all tags)
For some reason I can't install Alpha Centauri on my Athlon 64. Nor can you install The Neverhood on a windows box more recent than Win98. So I put together a new desktop made out of an old motherboard and other assorted hardware.

A good amount of time was spent by me in moving files from disk to disk (old 6GB, 20GB laptop drive with harness, 40GB "Windows" drive, and a 60GB external drive), then trying to find the right master/slave settings so that the BIOS would see something. Finally figured out I had to enable Logical Block Addressing (LBA) on IDE 0. Learned all sorts of fascinating stuff about PC hardware, and finally solved the mystery of what the difference is between an IDE cable and an ATA cable — which is none at all, "ATA" is just what the cool kids say.

Installed windows, blah blah blah. I need a better video card for the box, because the bios won't recognize my Savage 4 card.

What's the deal with PCI Express? Aside from upgrading the video card, almost every other component that used to require a PCI card now comes standard on the motherboard: sound, ethernet, USB. Does anybody even make PCI Express cards?

I needed a case fan, because it isn't a PC if it doesn't make a lot of fan noise, so I stopped by CompUSA to see what they had. While I was there I picked up an nVidia GeForce 5200 card for my Athlon box (a bargain card to replace the bargain card I put in a year ago).

This means I can now play Civilization IV.

Boy is this game buggy. I have the latest patch, and there are just all sorts of little interface glitches. Units that walk onto ocean squares and disappear. Zoom keys that don't zoom. My cities getting attacked by barbarians, and the camera doesn't even bother to center on the event. 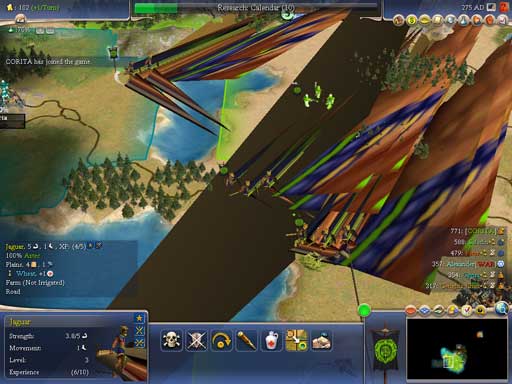 The one missing feature I'd like the most would be an improved "Religion" stats page, to display which cities have which temple/monastery/cathedral improvements for each religion. Instead of having this information in a handy reference, I have to go flipping through each city to figure out which city can build the req'd missionary.

Query: Does anyone know of a good image tagging application that I can use to sort through a bunch of photos? I'd like to be able to rank things like image quality and composition, plus tags for discrete elements.