By thenick (Thu Oct 26, 2006 at 11:54:02 AM EST) UMiami, Cake, Bridge (all tags)
Heads of State who ride and wrangle,
Who look at your face from more than one angle,
Can cut you from their bloated budgets,
Like sharpened knives through Chicken McNuggets.

Seems like a lot of work running around to find the cheapest physician when the difference between it and my HMO is ~$100 annually. That and the prescription plan could cost up to $200 per prescription, much different than the $400 annually out of pocket.

What really ticked me off was that our benefits person was proclaiming that the current prescription plan is unfair to those who only need a few scripts per year, completely missing the point of group insurance plans. Immediately after the meeting I watched her go outside for a smoke.

Goddamnit, that shit is annoying. And now I can't get any relief at work because HR threatened legal action if I urinate on my feet while on the job. I don't get what the big deal is, I had my back turned towards the patients in the ICU.

If I had a Horse, It Would Be Dead By Now

I relegated myself to not having heat in my car this winter, but I didn't expect my engine to start overheating. So like an idiot, I figured my sensor had broken because the oil temperature was fluctuating wildly. Only yesterday did I decide to check my coolant, which was bone dry. After filling it up, my heat started working. I checked again this morning and at lunch and the fluid level appears to be the same, so it was just really low.

You'd think that Valvoline would have caught that when I stopped in two weeks ago, but you'd be wrong.

Michigan is awesome. Toledo is less so. In fact, Toledo sucks so badly that the Uni has sent me 2 free tickets to the UT/Akron home game this weekend. Anyone want them? Didn't think so.

In the UMiami-Florida International game, what can only be described as a riot erupted on the field. In case you missed it, players on both teams began swinging helmets and stomping on fallen players. It was violent to the point that there should have been a number of arrests made.

While the players lost control on the field, 700 kids, guests of the Miami-Dade PD's "Join a Team, Not a Gang" program, watched from the stands.

Where can I buy a foreign language keyboard? Any language will do. And as always, I don't want to spend a lot for that muffler keyboard.

Build a Bridge and Get Over It

This is the construction progress so far on the Maumee River Crossing, the world's largest single tower cable-stayed bridge and the replacement for the old I-280 Craig St. Drawbridge (foreground). It should have been completed by now, but a crane went haywire and killed five construction workers. 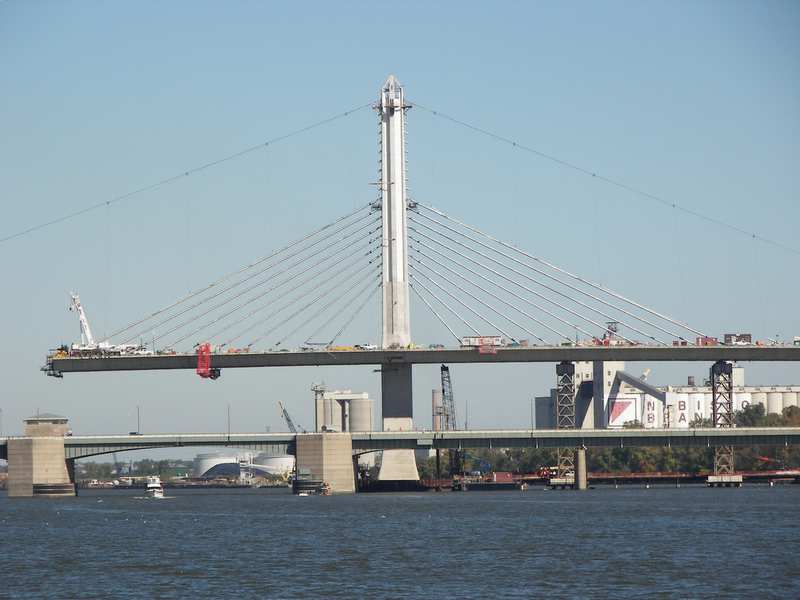 When it's completed in 2007, the 400ft. tower will be illuminated with multicolored LEDs, allowing it to change color and pattern. The Craig St. Bridge will serve at a street-level river crossing, and also connect two segments of bike trails into a ~5 mile path.

And no, this isn't my entry into the PFC. I've got to upload that when I get home tonight. As much as I'd like to reshoot the photo with my new UV filter, it won't arrive until this weekend and the forecast calls for a wintery mix.