It's a shame we have to die my dear

Inside: Leeds festival review, moving desks, yet more gardening, photo of a duck feather - what more could you want?


Leeds Festival
Sunday only, I'm afraid, so no Lemon Jelly or Iron Maiden reviews here. We arrived after a two mile trek from the car park to see All-American Rejects on the main stage, trying desperately hard to warm up the crowd. After a while having someone screaming, "I love LEEEEDS", at you lessens the impact. They did quite well, though, and there were some good melodic tracks there. After that there was a bit of a gap; we saw some unsigned folks, listened to some crazy metal/trumpets/saxophone band whose name I've forgotten, then a spot of Roots Manuva. You can tell there's a big set of speakers behind that main stage; the bass was pretty impressive. I've never had my head actually vibrate before.

We made our way over to watch The Others (singer's catchphrase: "bless your little cotton socks"), who were rocking pretty hard but I didn't recognise any tunes. This was followed by Ed Byrne in the comedy tent, who is absolutely brilliant, even if his Carphone Warehouse radio ads are extraordinarily annoying.

Quickly back to the main stage to catch the end of the Charlatans, who were... well, rather uninspiring. They managed to leave the stage before anyone noticed, which is pretty impressive. We then had Razorlight who was pretty good - some good performances of some catchy tracks. Kings of Leon were on next, who I'm not so keen on but had more songs that I recognised than I had expected. Finally, the headliners: the mighty Foo Fighters.

This band was essentially why we'd forked out for tickets. They played a blinder, a great set with a few of the new tracks but mostly the old favourites re-worked for a great live show. Dave Grohl chatted amiably to the audience, was genuinely concerned that people didn't get stomped in the mosh pit, and gave a lot of energy out to the crowd who responded in kind.

All in all, it was even worth waiting an hour in the car to get out of the car park at the end of the night...

Moving desks
Have moved to somewhere new in the vast building in which I work.  A serious improvement, mainly due to the proximity of windows, letting in some weird "natural light" substance that seems to make me feel less depressed. Plus I get nice views over Canary Wharf. Thought: can we paint lines on the Dome's roof and use it as a sundial?

Gardening
Managed to do a load of earth-moving, have a nice flat space in which to lay some more paving, and bought some plants to fill in the gaps. We're aiming for a pattern of small square slabs which looks like a pixellated graduated fill, from paving to green stuff. With luck it'll actually work...

Photo of the day
A shot of a duck feather today. What do you think? 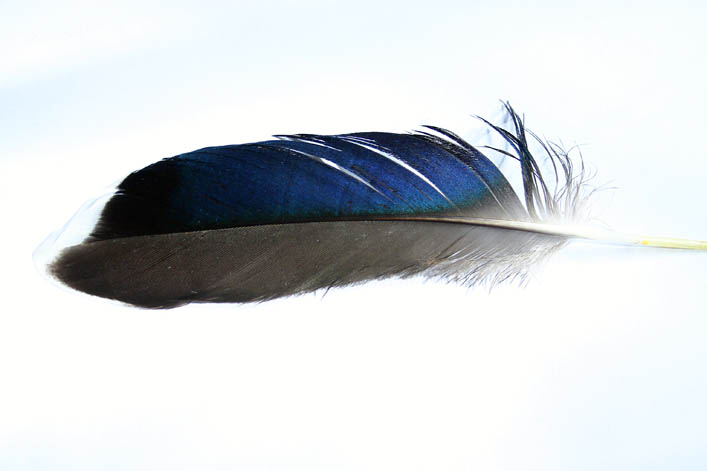