Awesome Elements of "Attack of the Clones" 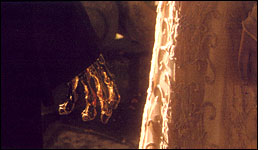 Apologies for the teensy picture. What is the deal with Anakin's replacement hand? C-3PO's hands look better than that! I know they want to show how technology advances between this movie and Empire, but I think they overdid it. I mean, in just a couple years they will be able to give him full-on, meaty artificial limbs, so would it have killed them to throw some flesh on that thing?

And on his wedding day, really.

I don't think I've properly conveyed the Awesomeness of this one. But I am just one man.