But while I am lying here

My "Great Moments in 'The Phantom Menace'" series was a success, I feel. The Greedy Jew scene was far and away the most popular according to the poll, with the thrilling opening battle coming in second. Nothing else garnered more than a couple votes.

Looking at comment counts (BSD-style), the first one generated the most comments, clocking in at 87. That's predictible, as it prompted a lot of general commentary on the movie, not just reactions to the scene portrayed. R2-D2's heroics sparked the next most commentary, with Darth Maul's introduction, Queen Amidala's bold tribute to Nabooian solidarity, and again the Jewish slave-owner generating a good amount as well.

My mom and sister were in the state visiting colleges last week and stayed with us for the weekend. Awesome weather, so we walked around the neighborhood and across the Brooklyn Bridge and such, sampled a lot of local cuisine and drank lots of wine. Also my mom had tickets to Avenue Q, which I had not seen. Very funny stuff. I had recommended my whole family see it when they were out here for my brother's graduation last spring, but they hadn't been able to get tickets. So, we all agree now that my dad would have hated it, but I still wish he'd seen it.

Anyway, it looks like my sister will be going to school upstate unless she gets off the waitlist at another place closer to home. It will be nice to have her within driving distance and maybe get to see her play some soccer once in a while. 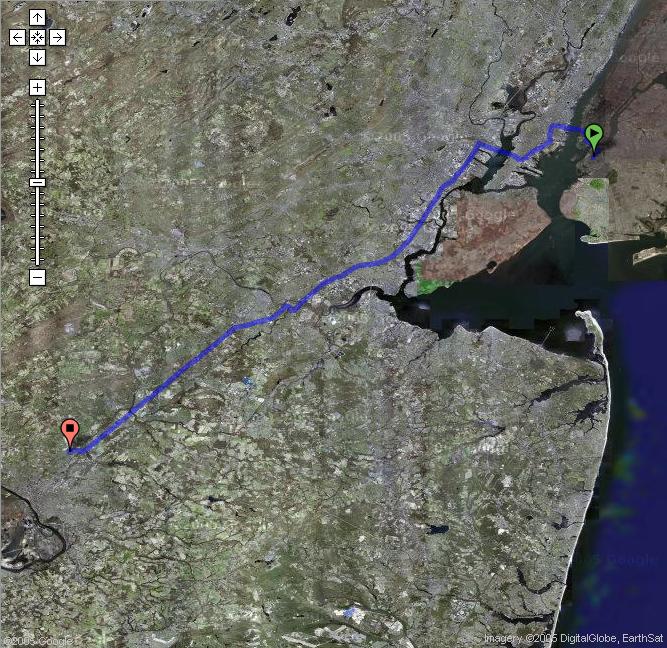 This is where I go most Mondays.

The novelty of writing and revising documentation has worn off. I agreed to do one section of a manual to help this manager out and now he just keeps giving me more. I can't tell if I'm just getting enthusiastic about my other (lower priority) project because it's !documentation, or if I actually find it interesting. I suspect the former.

I got my taxes all figured out. My predictions were way off...my federal refund almost covered my NY taxes and my NJ refund fell short of covering the amount owed PA by a little less than $250, so I ended up just a touch in the red. Not bad at all.

I should probably (read: legally) be making estimated payments for 2005. But I don't have any cash, so I'd have to use a credit card. I think the interest the state will charge me on late payments will beat the rate on my Visa, though I should probably look into it just to be sure. Ideally, I suppose I'd have my employer withholding taxes for both NJ and NY (less the NJ withholding). If you can even do that. Whatever, I don't have to think about it for another eleven months, right.

Ad hoc pays his taxes by phone. Didn't know one could do that. I am paper-and-calculator all the way. I'm no Luddite, but I think I have internalized a certain healthy distrust of modern technology that waries me of "e-filing."