When your driver calls you and explains he can't find a way of getting to your house, a certain sinking feeling tends to drag you down. Still, once I'd found his shiny black Mercedes at the wrong end of a one-way street round the corner, we were on our way to Heathrow. From getting out of the car to sitting down in the executive "but stressed businessmen need free beer" lounge took a mere fifteen minutes - quite impressive. The flight was relatively pleasant, the on-seat screen was quite neat, the selection of entertainment on said screen was resolutely uninspiring, the food was actually quite nice, and the stewardess was a miserable dried-up hag. Gotta love flying American Airlines. Found the car dispatcher chap, got the car into the City and arrived at The Carlyle. Room: fine, if not amazing - but the bathroom was a self-conscious person's nightmare, being mirrored on all four walls from floor to ceiling. Very impressive, although I don't like being able to see myself from multiple angles when having a crap. 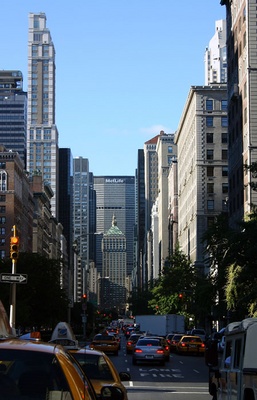 Got up early the next morning, got some breakfast at the hotel and headed to the office. Nine hours passed relatively quickly, my boss flew in by about 3pm NY time and we left about late for a dinner at a nearby Italian. I'm afraid I can't remember the name, but there were two main features that stood out in my mind:

This was followed by a brief trip to Hooters, purely for the comedy value. 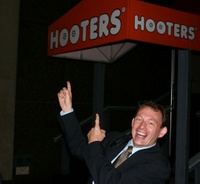 The one thing that hits you about New York is purely how much it is like your mental image of New York. It's very "New York-y". The yellow cabs, the smoke coming up out of the grills in the road, the skyscrapers, the street stalls grilling up everything from hot-dogs to halal; it's all very much as you would imagine it to be. And it's an exciting place to be; the place does seem to buzz with a certain energy and frenetic desire to move forward, to get ahead. 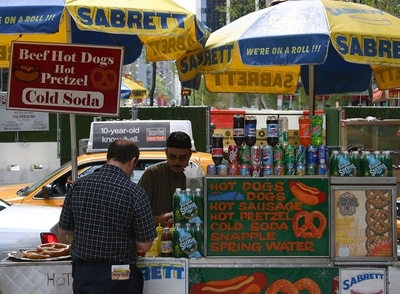 Wednesday passed quickly enough, with just enough time for me to get annoyed by the toilets in the office. Firstly, the cubicles have big gaps around the doors; I don't like having an audience (see above). Secondly, everything is automatic. Which is fine, but things tend to happen before you want them to, or last shorter than would be helpful, and generally conspire to piss you off. When you're spending five minutes trying to figure out how to get the fecking toilet to flush, you know that life could be made easier. USian bathroom designers: worried about hygiene? Either a) Get a grip, or b) install a floor switch. Sheesh.

Wednesday evening started at the Red-Eye Grill where I had a rather nice crispy duck salad followed by a half-rack of ribs, which I obviously didn't finish, only having a regular-sized stomach. Eating out with your boss is a strange affair; it's much easier when there's other colleagues with whom you can share the conversational load. I get on quite well with him, thankfully, but you're always slightly on edge, avoiding saying anything that will mark you down as someone who has undesirable traits. When you're both knackered due to work, stress and a touch of jet lag you both struggle a bit to maintain the flow.

Afterwards I had my camera, so decided to walk down 7th Avenue towards the glare of the screens of Times Square. The screens there are bright and more than numerous - you can't help but feel slightly overwhelmed. The boundaries of taste are stretched some way past their snapping point, but that's part of the gaudy fun; it's way over the top but makes you laugh rather than be annoyed by the ludicrousness of it all.

My boss was more than happy to get a shot of me with the Naked Cowgirl, and also now has the picture of her on her own as the backdrop of his phone. 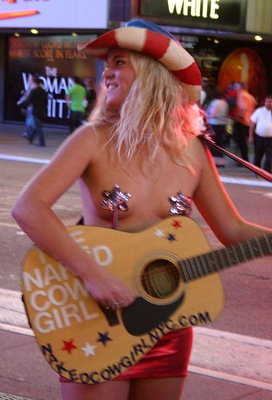 I wandered downtown past Bryant Park, where a huge group of natives were watching the Yankees game. It made me regret that there isn't a single London team for football games that the entire capital could get behind (or more likely, complain about). I eventually found my way to the Empire State Building for some late-night tourism; it was quiet and the rows of velvet-roped lines made me think of Shrek as I bypassed them. The view is pretty incredible, and the accent of the "NY cabbie" character who narrates the audio tour was similarly impressive. 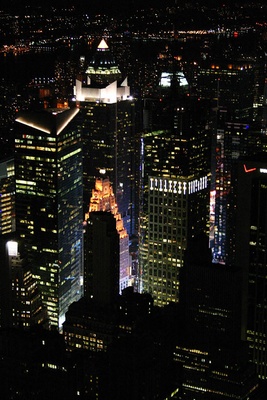 Thursday was enlivened by a sneak trip out of the office to Tiffany's (the gf had made it clear that she didn't expect a present, so I thought it would be nice to get her one), and finishing up the remaining space on my camera's memory card. 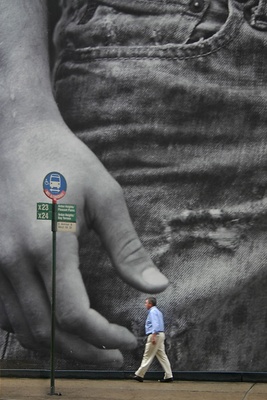 The final evening was spent at a place on the Upper East Side called Maya, which does magnificent Margaritas (we were working our way through quite a lot of the Especials), although the food didn't do anything for me; my primitive Londoner's idea of Mexican is fajitas and tacos, not a Tamal al Chipotle. Afterwards to a bar called "Becky's" which had an impressively large selection of beers and live "music" in the vein of Phoebe from Friends. Acoustic versions of Pink Floyd tracks are sometimes good, but mostly something to be avoided. Got a cab home very quickly...

Returning home from NY sucks, for a variety of reasons.