The Iceland Diaries - - Day 6b

I've intentionally gone looking for the disgusting foods Iceland is known for. I found them, too.

At least I missed the bar fight that night.


As I left off in Day 6a, I was in the kitchen of the guesthouse, preparing to try one of the most notorious comestibles Iceland has to offer: hákarl, or rotted Atlantic green shark. Why rotted? Because fresh the thing is poisonous. In retrospect, even "properly" prepared it did my system a world of bad. 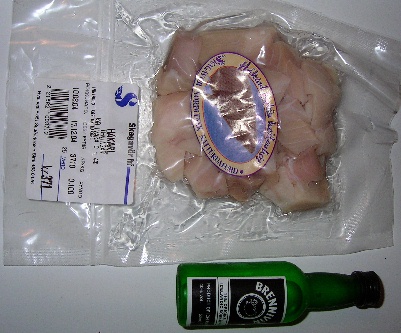 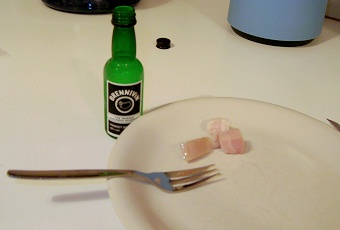 Hákarl: OMFG! this is the Nastiest! Shit!! EVAR!!! I downed the Brennevín and it didn't help. I didn't spit the hákarl out, but it took a lot of effort just to keep it in my mouth and chew a few times. I literally was choking it down. Ugh. The two couples were laughing so I offered them the rest. They thanked me as one of the men came over, took the bag and ripped it all the way open. "Maybe it's bad hákarl," he said. How could anyone tell the difference? He pulled a few chunks out with his fingers popped them in his mouth and while chewing, nodded his head in approval saying, "Mmph this is <chomp> good hákarl <chomp>" and passed the bag around the table.

The rest all had some and I decided to give it a second shot. Maybe it was just the initial shock of the smell. Maybe it was the anticipation. Maybe I just got one crappy piece. Or maybe I'm just an idiot.

It was even worse the second time, and I had no more Brennevín to help wash that awful taste out of my mouth. The vodka bottle was my friend much as Google is yours. Twice inside 26 hours I was putting the cleansing and restorative powers of Smirnoff 100° to good use.

The others liked it or pretended not to not like it and all told me how good it was, but they didn't finish it all. They threw out the rest rather than closing the bag and putting it in the fridge. They claimed the owner of the place didn't like us opening that crap here but I think this is one of those let's-fuck-with-the-tourists dishes, at least since 1944.

These people were impressed with my stupiditycourage and interest in their country and culture and told me they work for this big meat company up in Akureyri. They asked me what else I'd tried and I showed 'em the Sviðasulta and Bitafiskur. "That's not real harðfiskur" and off went Ólaf (I think it was Ólaf). He returned with some very long, dried strips of fish. He ripped a piece off and then stripped the skin off it. Then he went to the fridge for some butter and put that on. "This," he explained, "this is harðfiskur."

Too right it was. After tasting it I wondered out loud about the cardboard crap I'd had out of the bag, evoking much mirth and merriment. 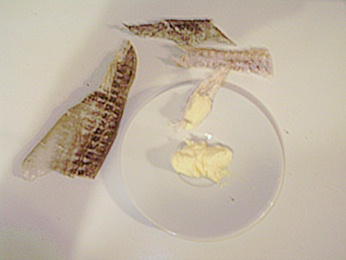 Harðfiskur: They aren't kidding; this stuff is hard. It's considerably different from Bitafiskur which is machine dried. Harðfiskur is dried by hanging outdoors. It's not nearly as airy. You have to peel off the skin and you're supposed to smear it with butter. Real Icelanders eat it in about a 3:1 ratio of fish:butter. It's very good and much more fish-like than the bitafiskur. And not as salty. It's the difference between the mechanically separated chicken goodness of a Slim Jim compared to real pemmican.

And that's not all! These guys had samples with them. More experiments! I was presented with a bag of what one might first think was some sort of Icelandic deli meat.

Experiments in disgusting Icelandic foods, part fjórir:
They're not telling me everything. 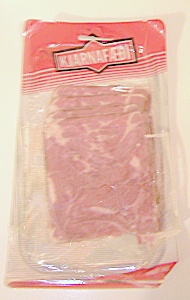 Kjarnafæði (Kyahr'-nah-vai-thee): This stuff is, as it was explained to me, leg of lamb which is smoked with tað, pressed and formed, then sliced into deli slices. I took a piece and started chewing. It was nice, but had a very strong smokey flavour. I should've known there was something going on because they were all sitting at the edges of their seats, almost bug-eyed with anticipation as I was told about tað.

Tað, because you really want to know, is dried lamb shit. This is the verbatim explanation they gave me as I was already chewing the stuff. They waited in gleeful anticipation for me to spit it out, but I disappointed them. After all, I'd already choked down the Hákarl. They then explained it came out of the need to heavily salt and smoke meat so that it would last in pre-refrigeration times. I asked about the general coldness throughout the year but apparently, it ain't enough. They told me that salmon can also be smoked with sheep shit.

Another food preservation method was to keep meat in the whey left over after making skyr, which is basically quark, something few USians know about. I expect I'll find out more about this whey preservation stuff on my next culinary tour of Iceland, glub help me.

The men began to tell me more about Icelandic cuisine. Once a year between January and February, people go (I don't know where to) in groups and eat the "traditional foods", which includes 13 pieces of meat. Among them are Hákarl, Harðfiskur, Hrútspungur, Slátur (more or less Icelandic haggis without the oats) and a bunch of other things that I'll get in an E-Mail.

Hrútspungur, because you know you want me to tell you, are the elusive ram's goolies, pickled in whey and pressed into cakes (annual production: about 20 tonnes) only prepared in January and February. A package has been promised to me and should arrive in about six months. I can't wait. The E-Mail didn't come and I only just found Ó's card in my suitcase last night; any updates to this will be in the comments.

I was told of the wonders of Sprengidagur (sprengee-daur); of Saltkjöt (salted lamb, cooked in water, eaten with yellow beans, rofur (no idea) and potatoes); and of Bolludagur, which is fishball & meatball and also bread with much clotted cream & jum (again, no idea) inside a breadball which is covered in chocolate. Umm... yeah. Can't be worse than svie, a singed sheep's head, cut in half (and retaining the eyes), boiled for a bit then eaten fresh or after pickling. Google any of these terms yourself if you don't believe me.

I've been invited to the northwest my next visit for a stay and a tour of the factories. I'm not sure if I actually want to see the processing of various dead animals into some of the most unspeakable foodstuffs, but I'm too intrigued to pass up the chance. This may be the push I need to go back to my vegetarian ways...

Foods I haven't yet had: sheep head soup, traditional lamb soup (not disgusting), whale, puffin, seal, and lots of other stuff I haven't yet discovered. If I make it next year to meet these people, I'll post another culinary report.

Traveller's Tip:
Veggie Go Home!
Just kidding. Mostly.
By now Iceland is probably sounding like Dante's 14th hell for vegetarians, and maybe in some regions, it could well be approaching that. Remember that I was intentionally seeking this stuff out.

"Soup, Bread & Salad" is a very common meal in Iceland and is (relatively) inexpensive. So maybe you'll have to pass on the soup, but maybe not. "Salad and French Fries" will be a vegetarian's mainstay, but there is a vegetarian restaurant in Reykjavik (Á Næstu Grösum1), and many other restaurants have at least a couple selections.

Vegans: Either bring your own food, live in Á Næstu Grösum, or go elsewhere. Seriously. You'll starve. I'm a former vegan; you can trust me on this one. Your only other hope is staying in a hostel with a kitchen and buying spaghetti and sauce in the 10-11 grocery store. The selections in Icelandic supermarkets are rather limited.

Although Keflavík has been ultra-cool already, I do miss the nightlife of Reykjavík. I'm off to one of the few bars I found earlier and I doubt there'll be more than 8 people in either of them.

I finally threw my washing in the machine before going. It was ripe enough that you wouldn't have noticed the smell of the hot water had we been in Reykjavík, which we weren't, so you did. That's something I screwed up in yesterday's diary. The Scots grabbed the washer out from under me, not the dryer. I'd had to wait for them because all the hotel towels were still being run, and I'd been switching them.

So back up to Hafnargata I went. This place is seriously lacking in nightlife. The one place I wasn't interested in was the sports bar, so despite my initial aversion, I went into Paddy's.

Inside was a big Icelandic barman "Ó" and a few Americans stationed here. They were cool, however and we got on well. The barman (who talks the talk of a sort of Godfather) said that if I was seriously interested in staying here that I should talk to him some more and gave me his number. Hmm...

A couple other Americans came in the place and were talking about trouble with some locals. Seems the locals got drunk and had tried to run the Yanks down. You have to understand something about Iceland: the news is not full of crime. There ain't much of it. And what little does occur, the perps are courteous enough not to do to the tourists. One place Stefán and I drove by was the prison (didn't get any photos), Hegningarhúsið. I was shocked at the size (tiny) and the security (a couple chain link fences), and that's where they keep their hardest criminals, not that there are many of them.

Anyway, we were all chatting about various crap and the subject of harðfiskur came up, and Ó said he really wished he had some. No problem. "I'll be back in 10 minutes." I went back to the hotel, got about half of my stash from earlier and headed back.

There were a couple cops talking to the guys and I figured it was about the local ijits. I presented the fish to Ó who shook his head in anticipation of some low-quality bitafiskur. He took a piece and ate it, then screamed about it being the best harðfiskur he'd ever had. More amazingly, he'd got it from some foreigner who hadn't been in town for 10 hrs. Surely Oðin and the other Æsir do smile upon this stranger. Although he is unable to converse in our tongue we will accept him as one of our own.

Once again a bartender was getting me ratted. It didn't hurt that I did a shot of Brennevín and actually smiled after downing it. While we went past normal hours, it didn't go nearly as long as in Reykjavík. I was actually back at the hotel before two and wrote some notes. Then I watched an episode of Monk before getting tired enough to sleep.

1 at Laugarvegur 20b near Klapparstígur. You can also look for the sign for "One Woman Restaurant". Check http://www.happycow.net/ for veggie places when travelling. You're welcome.